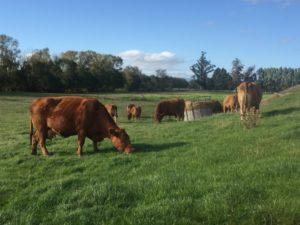 South Devon cattle are the biggest English beef breed dating back to the 16th century. From the southwest of England they and their predecessors have provided Plymouth with beef and dairy products throughout it’s history. South Devon cattle were taken to the North American colonies in considerable numbers, including a few in the Mayflower in 1620 and others in 1623.

South Devons had established themselves as a breed by 1800, although The South Devon Herd Book Society of England was not formed until 1891.

By 1912 the breed had overcome many prejudices and drew favourable attention in the show ring and in national trials, It was noted for it’s rapid growth to an enormous size without impairing the quality or quantity of it’s milk.

The South Devon as a meat producer really began to achieve world-wide prominence during the 1960’s when weight-gain recording became popular and the breeds’ excellent performance became recognised.

This distinctive breed of copper-red cattle can now be found the world over; thriving in the cold of Canada and the heat of Africa.

First introduced to NZ in 1969 their role in cross breeding for beef herd improvement is now firmly established with studs nation-wide supplying bulls for this purpose.

Their wonderful temperament make them easy to handle and work with, earning them the tag of ‘Gentle Giants’.